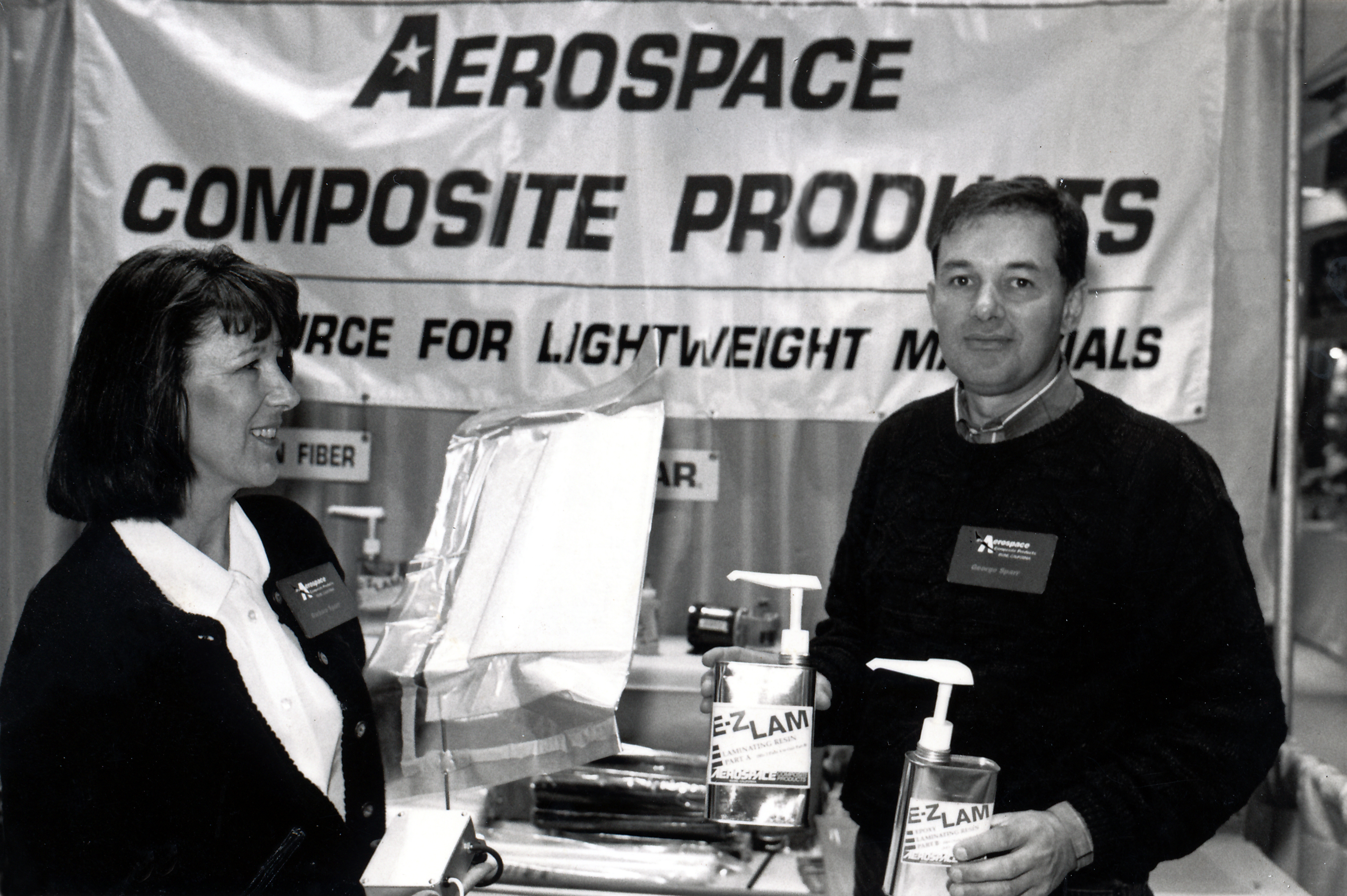 Question: What’s interesting about how ACP was founded?

George: I worked for a company called Ciba-Geigy - they were heavily involved in composites.  My job there was new product development.  Basically, any company that wanted to use composites, I got involved in those projects.  Ships, fishing rods, you name it.  Not yet air crafts.  The company didn’t really want to deal with some of these smaller markets, so they gave them to me.  I helped develop tennis rackets for Spaulding.  It was that type of business that got me thinking that maybe there is a niche that we can get involved in.

Barbara: I don’t think we ever thought of it until you started going in with the model airplanes… We were living in Connecticut at the time.  George and Justin were involved in model airplanes.  They would go to these meetups.  And because George knew what would go on actual aircraft, he would bring over sample fabrics from his company that were in the trash and everyone was impressed and curious.  George became the guru of composites in this little modeling community.

I wasn’t working, so we thought, why not sell this carbon fiber to the modeling industry.  So, we put an ad in a magazine and got our first sale from California for $13.

George: In the beginning, I was putting it on the model airplanes, to stiffen them up, make them lighter, exactly what [carbon fiber] composite does.

Barbara: So, George would start going into his company at night and he’d run flat sheets of carbon fiber and cure them.  I’d strip them, roll them up and advertise them in this little mail-order catalog and that’s how we got started.

Question: What inspired you to start the company?

George: It was a combination of my building model airplanes with my son and people asking questions about the composites we were using.  They wanted to buy the stuff and use it as well.  And for years that is all we did.

Barbara: When we moved to California, we were working out of our garage.  The homeowners’ association caught us running a business out of our home, because UPS came every day.  We told them it was just a hobby, but it was obviously more than that.  So, we moved to Northern California and opened our first office in San Leandro.

George: Once we were in San Leandro, I realized that although the distribution business was good, we needed to begin manufacturing. We need to build something, make something and that’s when we started to make carbon fiber chassis for the remote-control car industry.

Barbara: We bought our first piece of equipment for $3,000 and we thought that was the beyond end all.

George: I was working for Kaiser Aerospace, which eventually closed.  It was then that I decided to focus solely on our business.

George: We started to get into more manufacturing.  I had some friends back east who knew that carbon fiber was making inroads in the medical industry for x-ray.  I had a friend who worked at a composite shop in Vermont who was a big player in the x-ray table space.  I was able to tap into my friend over there and get some engineering help.  That’s when we began making x-ray panels.

Question: How has the business evolved over the 35 years? When you started it in 1985, did you envision that it would be where it is today?

Barbara: Jessica and Justin were teenagers back then and had no interest in talking about the business.  I hired kids from the neighborhood to help.

George: We were so busy, we never gave “10 years down the road” much thought.

Barbara: We figured we had a little company, it was bringing in an income, we were happy and that’s all we really cared about.

George: I remember when we hit a million…

Barbara: …When we hit $1 million [in sales], we thought we were on top of the world.  Justin and Jessica went off on their own. But then Justin moved back to California from the east coast, about to have two children, and one day asked us what we were doing over there.  He was at SalesForce.  But one day he came into the office, sat us down and wanted to know everything.  That was it, he was ready.

George: I don’t think Barbara and I ever gave it much thought.  The company was growing, and we were busy just working hard.  Until Justin came on board, we didn’t really know what we were going to do.  We knew that we couldn’t comfortably hand the business over to just anybody.  Nobody cared about the business the way we did.

George: Justin changed the business with his ability to buy more equipment and take risks that we were afraid to take.  Both he and Jessica were naturals.  It was wonderful.

After Justin came on board, we got Varian Medical.  I could not have gotten them without him.  I was very impressed with him.

Question: What do you hope to see from ACP Composites over the next 35 years?

Barbara: I hope Justin and Jessica keeping running it as they are.  They both love what they are doing.  They are good at what they do. They love going to work every day.

George: There is no substitute for carbon fiber composite materials.  And because of that, we built a very sustainable business that has stood the test of many of times.

The Benefits of Using Composite Materials For Pickleball Paddles

Get in the Pickleball Game with ACP

Ready to get started?